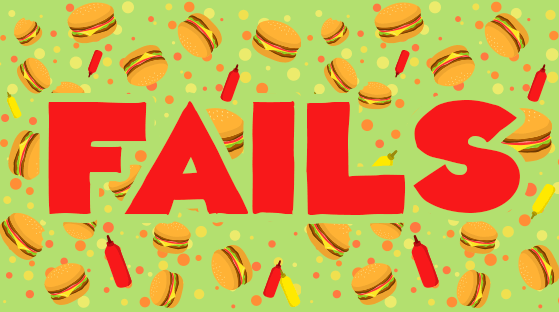 Throughout most of the year, we celebrate the best of marketing, using this insight to better understand the industry and the latest trends. But while we believe there’s much to learn from the best, we also know failures can teach us a thing or two! With it being Halloween tomorrow, we thought we would compile a list of some truly monstrous mistakes brands have made. Whether on video, social, or advertising, let us relive and take stock of some of the most disturbingly disastrous fails of the past 10 months.

First up, let’s start with the outrage that was the Bud Light #UpForWhatever campaign. Back in April, Budweiser used the slogan “The perfect beer for removing ‘no’ from your vocabulary for the night.”

Within days of its launch fanatics took to social media in disgust, criticising the brand for encouraging a rape culture with the hashtag #NoMeansNo. Even elected officials began to slaughter Budweiser for their controversial marketing tactics. Congresswoman Ms. Lowey added: “This grossly shortsighted marketing tactic shows an epic lack of understanding of the dangers associated with excessive alcohol consumption, such as sexual assault and drink driving. We need responsible companies to help us tackle these serious public health and safety problems, not encourage them.”

Soon after this public display of revulsion, Budweiser rapidly stopped the production of the labels. How this tagline made it through countless levels of reviews in the first place we’ll never know!

The next Marketing Hiccup comes from Heinz, the beloved food-processing manufacturer.

Korell wrote on his Facebook: “Your ketchup really isn’t for under-aged people”. Leaving Heinz more than a little red faced. The Heinz social media team was quick to respond and as an apology Korell was given a free bottle of ketchup with his own personalised design.

The hashtag #PrimeDayFail became an Internet hit with Amazon shoppers when they were promised sales better than Black Friday but got nothing more than a ‘garage sale’.

The much-hyped Prime Day was just that – a lot of hype. Customers expected great deals on the latest trends but instead were offered discounts on Balaclava’s and beard growing kits. Disgruntled shoppers didn’t let Amazon off lightly as they received 41,434 negative mentions on Twitter. One user wrote: “When I die, I want whoever was responsible for #PrimeDay to lower me down into my grave so I can be let down one more time.”

Many Prime users were completely unaware of Prime Day in the first place. They received emails for the event, however the email did not indicate what the benefits of prime day would be. Luckily for them, they didn’t miss out on much!

Birds Eye’s ‘Mix up your menu’ campaign cooked up a storm on social media in August. The frozen food brand was mocked after releasing an ad, promoting chicken dipper canapés for children’s parties.

The advert featured food blogger Katie Bryson, making the ‘civilised’ snacks, which a lot of people on social media got very, very confused and angry about. Users of Twitter wrote: “The Birds Eye chicken dipper canapé advert is the worst thing I’ve ever seen.” And “Canapés made with chicken dippers & potato waffles. Seriously?”

Birds Eye’s agency, Club Havas, were contacted to see if their advertising team had lost their minds, but in fact they were more than happy with the criticism and indulged in the fact the ad went viral, even if it wasn’t in the way they had intended!

The Volkswagen Emissions scandal has to be one of the biggest blunders yet! Costing them $18 billion in fines, a 32% drop in shares and the resignation of their chief executive, Martin Winterkorn.

Over 11 million vehicles worldwide have been affected due to Volkswagen’s deception. It has not only given their piggy banks a bit of a bashing but has also tarnished their reliable reputation not only as a brand but the prestige of cars being ‘made in Germany’.

It’s not only a marketing fail, but an ethical dilemma!

Burger King went to extremes this Halloween with the release of their Black Whopper. When the Black Whopper was first launched, it proved a hit amongst Burger King diners. However, what they didn’t know, was that there was also a Halloween-themed side affect hours after consuming the burger.

The realisation hit the customers when they got home and popped to the loo! A Twitter user wrote: “Incase anyone wanted to know, the Halloween Whopper turns your poop green. And not even sickly green. Like cartoon green. Comical green.”

While this social media outcry doesn’t rival Volkswagen’s recent fails, the Burger King brand is still getting knocked. Brandwatch data says the burger has collected 29,000 tweets since its debut, with 89 percent of them being negative.

Although many customers are unhappy with the side effect, many are keen to try and have even suggested a re-release for St. Patrick’s Day!

So there you go, that’s our round up of 2015’s top marketing fails. Who knows what eye-boggling blunders may make their way on to the list by the end of the year. Did we miss anything that deserves a spot?