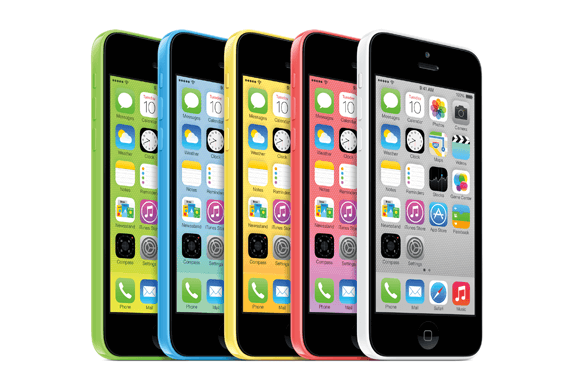 If you’re looking to upgrade your iPhone, for the first time ever you can decide between two brand new devices: the iPhone 5s or the lower priced iPhone 5C.

What’s the difference between them I hear you ask? Well, the iPhone 5s (which comes in gold, silver or ‘space grey’) is your more traditional ‘step up’ from the iPhone 5, which was released this time last year. The 5s comes with an A7 chip, a fingerprint sensor, ‘ultra-fast’ wireless, an 8-megapixel camera and iOS 7.

The iPhone 5C will be available in blue, green, pink, yellow and white and is marketed as the more affordable device. It features an A6 chip, the same ‘ultra-fast’ wireless, an 8-megapixel camera and iOS 7. The main difference between the two is the plastic shell of the 5C, which is cheaper to manufacture compared to the classic aluminum and glass combination of previous iPhone handsets.

Apple’s move into the lower priced smartphone category is presumably to increase their handset sales. However, at over £450 a pop (and just £80 less than the 5S) the 5C isn’t exactly a budget buy. If Apple had priced the 5C at around the £350-400 mark, similar to the Android offering of HTC or Samsung, the company might have had a chance to expand its smartphone sales.

There’s mixed reviews in the office, here’s what we’re saying:

“The screen still looks a little small for my liking but I’m loving the gold colour and the fingerprint scanner- no more snooping!
Colette Busbridge, Financial Administrator

“I feel like Apple may have lost it’s way slightly. Instead of creating new, innovative products, they’ve, again just re-skinned what they already had and are expecting another £500 for it? Steve Jobs must be turning in his grave, where’s the innovation? And the fingerprint scanner doesn’t count; the Motorola Atrix had the same technology two years ago.
Chris Dudley, Graphic Designer

“The real selling point for me is the new and improved design of the operating system. When I upgrade I’ll go for the iPhone 5C in green.”
Scott Bloomer, Senior Designer

“I love the colour iPhone 5C’s, I would definitely go for the pink one! My one criticism on looks would be when you add on the cover you can only see part of the iPhone wording on the reverse… ‘Non’ = meaning Rubbish! It would have been better if you just saw the apple icon.
Nina Billington, Senior Art Director

“Android is king, down with the iPhone!”
Christian Duffy, Web Developer

“Even though the iPhone 5C is marketed as the ‘budget’ option I still think it’s mega expensive, £80 isn’t much of a saving! Saying that, I have a bit of a soft spot for the bright yellow one so I still might have to make a cheeky purchase when my current contact runs out”
Amanda Smith, Social Media Manager