LACKING in the follower department? A quick Google search could solve that problem for you, all for as little as £13.

Far from slowing, the market for buying followers and friends on social media is booming. One of marketing’s dirty little secrets, don’t be fooled into thinking it’s the underground players hoping to make a quick score by buying followers, it’s a game that large brands and celebrities are also playing.

According to a report in The New York Times famous brands like Pepsi, Mercedes-Benz, Louis Vuitton and artists such as 50 cent and Diddy are all guilty of adding and losing large numbers of followers at a time, sparking the fake follower debate. However, these brands and celebrities are just minor offenders compared to the top ten list social network tracker ‘SocialBakers’ have compiled. Earlier this year, pop teen sensation Justin Bieber overtook Lady Gaga to become the Twitter user with the most fake followers. 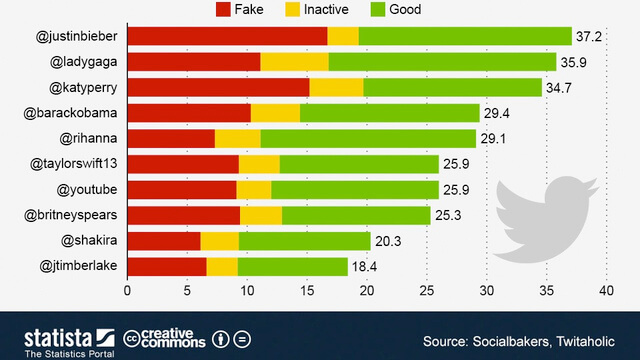 Usually an account that has purchased fake followers will see a spike in user numbers literally overnight, with an equivalent drop in followers about a month or so later. Of course, these ‘followers’ aren’t really people; they are simply ‘bots’. A quick look at these so-called followers reveals a bunch of mute, solitary eggs (twitter profiles with no profile picture, never tweet and have no followers). These fake accounts aren’t just limited to Twitter either, with marketers able to buy ready-made batches of fake Facebook ‘likes’ as well as YouTube ‘views’.

I can only assume that people buy twitter followers to appeal more influential than they actually are. After all, popularity is currency in social media. Companies, celebrities, bloggers, and media outlets all benefit when they rack up followers. It’s even better when those followers retweet your content, such as links to products, fundraising pages, or articles, which in turn can all have a knock on effect on revenue and exposure.

Since the early days of social media, the numbers of twitter followers have been a key metric of value to a company or brand’s appeal and a measure of their popularity. In a world where 1000 followers can reportedly be purchased for as little as £20 or $30, increasing the amount of followers on an account can be a relatively inexpensive way to increase one’s perceived visibility. So what’s the problem?

Legally it’s not a crime, morally it’s wrong (and violates most social networks Terms of Service). It’s a virtual two fingers up at companies and brands that have worked hard to achieve a good reputation, status and credibility within their industry and through social networking. They are being cheated by lazy marketers who can’t be bothered to grow their following organically. Worse than that, when someone artificially inflates their follower count, it’s fraud – you’re tricking people into thinking you’re more influential than you are. Luckily, it’s not so easy to get away with anymore..

Fakes.statuspeople.com is an online tool that connects to your twitter account and assesses how healthy your following is.

As you can see from my search on our @GWCM_ account, it tells you how many fake followers we have as well as a percentage score on how good your general following is (as a general rule, anything under 10% of fake followers is normal due to the spam filled world we live in)

The handy search engine also lets you check the authenticity of other people’s twitter accounts. Are you suspicious of anyone who has gained a significant amount of followers overnight? Why not check!

So, what do you think to the faux follower trend? Does it bother you?